For the occasion of European Year of Cultural Heritage 2018, initiated by the European Parliament and the European Commission, the Network of European Royal Residences has developed a joint cultural project exploring the themes of culinary art, food and gastronomy in 15 European countries: “A Place at the Royal Table”.

Officially launched on 15th March 2018, this unprecedented event closed the European Year of Cultural Heritage on 10th December 2018 with an official dinner at the Palace of Versailles under the high patronage of the Ministry of Europe and Foreign Affairs, Mr Jean-Yves Le Drian.

Combining old culinary traditions with more recent innovations, five Michelin-starred chefs, working with the Royal Residences, will pay tribute to centuries-old fine European cuisine, which is recognised as one of the finest in the world. The dinner, “eighteenth-inspired”, has been imagined and designed by chef Alain Ducasse. With hime, 4 European Chef proposed a “farandole” of sweets

This event gathered in particular the ambassadors stationed in Paris, the directors of the largest castles-museums in Europe, members of the Network of European Royal Residences, and representatives of European Cultural and Economic Institutions.

📘 Download the Menu and the booklet of the dinner !

On this occasion, the members of the Network of European Royal Residences having been awarded by the European Union Prize for Cultural Heritage / Europa Nostra Awards 2018 have been celebrated.🏅

📷 All pictures are avalaible here. 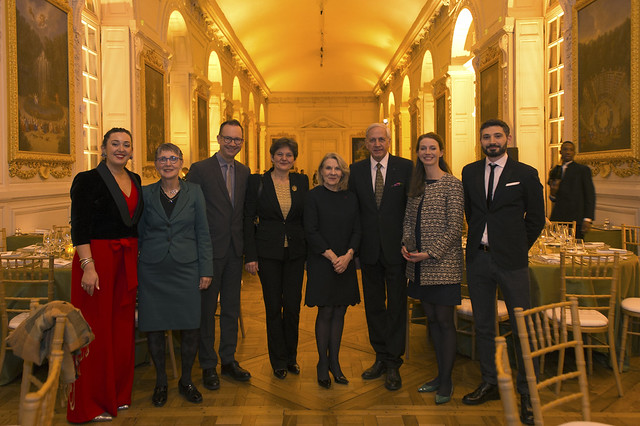